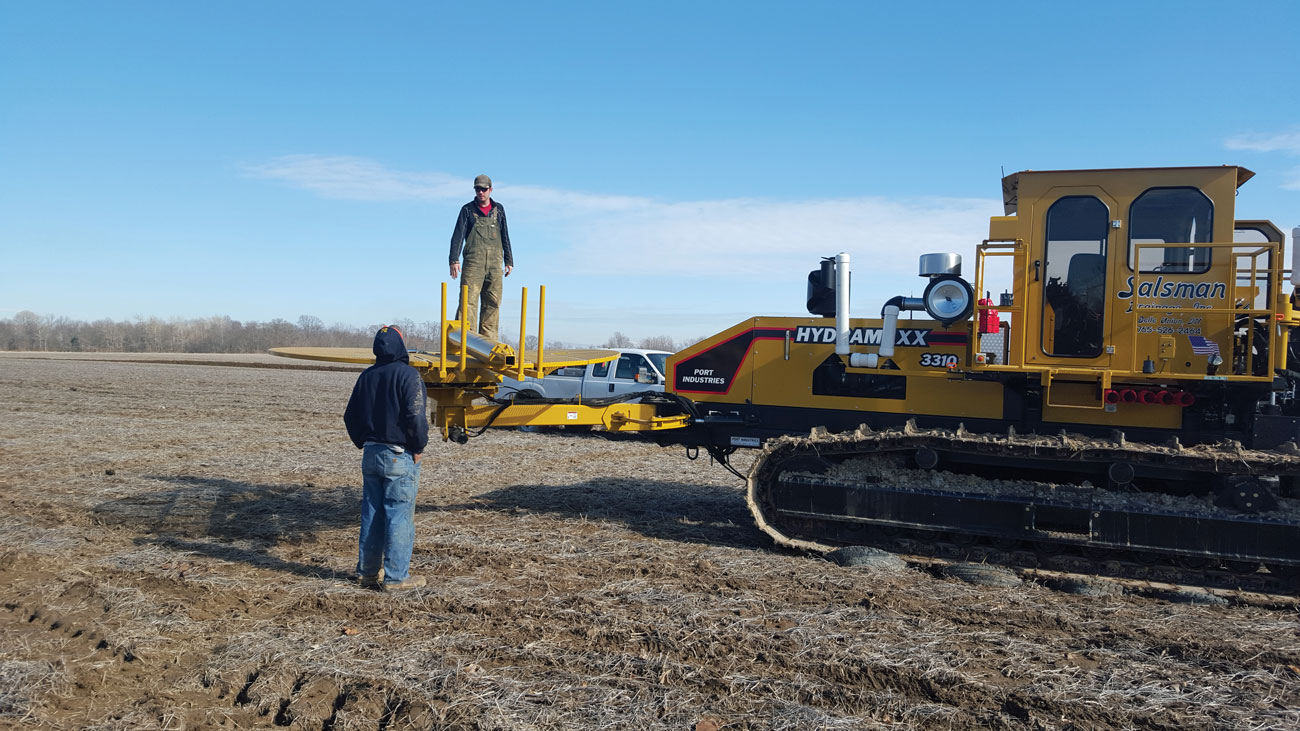 In 1821, Putnam County, Indiana, was formed. Located west of Indianapolis, the county was named after General Israel Putnam, who served during the Revolutionary War. It’s an area in rich with industry, agriculture and includes the community of Belle Union. It’s also where Devin Salsman, owner and operator of Salsman Drainage, Inc., calls home.

After college in 1985, Salsman’s ambition was to work on his family’s farm, yet the timing wasn’t right. The economy was rocky and volatile. Interest rates were high and margins were low, which meant he needed to look for employment elsewhere. Salsman landed a job at Ryland Farm Drainage. “I worked for Stanley Ryland until July 1988. During that period, we experienced horrible drought. No groundwater or rain meant work for the company was scarce,” Salsman shares. Unfortunately for Salsman, that meant it was time to look for a new employer.

In 1992, four years after he left, Salsman had a conversation with his former boss that changed everything. “Stanley not only asked me to return to the business, but he also offered me a partnership.” A stake in the company and working alongside his former mentor was an opportunity Salsman couldn’t refuse. The two went to dinner to talk, sign papers and make it official. That evening, one additional dinner guest joined the pair: former Fratco president and CEO Steve Overmyer. Fratco was Ryland Farm Drainage’s pipe supplier, and there was no shift in that decision when Salsman came on as part-owner. “Stanley was already doing business with Fratco. When we all went to dinner, I met Steve, liked him, trusted him and signed the contracts to order his product that evening. I have been a customer of Fratco’s ever since,” reflects Salsman.

That momentous night, Ryland and Salsman Drainage was born. It was also when Salsman learned about Fratco’s history, products and what the now four-generation-strong company was all about. When asked why Salsman selects Fratco pipe time and again when the market is filled with choices, he says, “Fratco is a quality product with exceptional service. Whatever I need, they get it to me, and that’s service above and beyond anywhere else.”

In 2006, Ryland retired, and the company became Salsman Drainage, Inc. When asked if he ever considered another pipe supplier when he took over operations, the answer is direct and swift. “No!” Salsman laughs, then continues: “We’ve always been happy with Fratco. They’ve always treated me well, even when issues arise. When you’re in business with someone for 31 years, you’re going to have things happen—we’re all human, and that’s a part of life. Fratco’s always taken care of me when I needed them most.”

In an age where the dollar doesn’t go as far as it used to and many once- trusted products seem to disappoint, Fratco has never wavered from their mission of quality pipe. “They are 100% customer-focused and have always gone out of their way for me,” Salsman praises. When asked why he depends on Fratco products and accessories, Salsman is clear: “They’re good people and always keep their word; they do what they say they are going to do.”

Accessibility to products is important yet direct contact with staff is essential, and Fratco’s team takes that to heart. An open line of communication for Salsman started thirty years ago when Steve Overmyer provided his phone number during their first dinner. “When the owner of the company gives you his personal contact information, that says a lot about his availability to their customers.”

Fratco cares about the success of its partners’ businesses. Chris Overmyer, fourth-generation Fratco president and CEO, has made it clear time and again that relationships matter. Whether the market is thriving or challenges arise, industry transparency is critical for Fratco. “Chris always has been available to me and upfront about what’s happening in the industry—just like his dad was— and that helps me make current and future business plans. He cares about my success, and I care about his,” Salsman heartily states.

The market’s recent resin shortage and strain on transportation have been something Fratco and their customers are navigating together. Salsman reports that although times have been tricky, he’s been able to keep installs moving along. “My customers understood from the beginning what was going on and never complained. Luckily, I was never without product. With all that we’ve been through together, Fratco took care of me.”

Business for Salsman is booming. What was once a two-person operation with minimal equipment has become an in-demand company. “When we started, we had a wheel trencher, an old backhoe, a dump truck and two pickup trucks,” he remembers with a laugh. “Our business has expanded greatly, and we diversified a few years ago when customers demanded it. We have definitely evolved.”

Salsman Drainage and Fratco have a lot in common regarding company values. “We’re both customer- focused—always. Quality is our standard above everything, and we guarantee everything we do. If an issue arises for a customer of the company before I started, we take care of their problem for free with no questions asked,” says Salsman. The core values Salsman shares with Fratco is one of the things he most admires about both companies’ similarities. “Fratco always stands behind their product and their work, and so do we.”

Many of Salsman’s employees have been with him a long time, including his daughter, who helps manage the office. “I treat my employees better than I do myself because I appreciate everything that they do for me. I may not sit long hours in the backhoe seat or dig as many trenches as I used to, but I know that’s a hard day’s work— I’m grateful for every one of them,” he humbly shares.

Salsman continues putting in hours at the office while also serving
his community. Born and raised in Belle Union, Salsman served as a Jefferson Township Volunteer Firefighter for twenty-one years. He’s also a board member at Endeavor Communications: his previous employer before he ventured out and became a business owner with Ryland. When he’s not at the office or visiting with customers, you might find him spending time with family, watching hockey or finding a quiet spot to fish.

Fratco partners, like Salsman, who work hard to serve their customers and community, keep Fratco inspired to continue making the best pipe in the industry. However, heading out to fish occasionally doesn’t sound like a bad way to spend a day either, does it?